Okayyyyy, saying falling in love seems a bit dramatic—it was more like falling in like. But, oh, was it so magical to me.

It’s almost as if it was a storyline from a romance movie. We met, and were instantly enamored by each other.

I was on holiday from work, and it was the weekend before I was supposed to head to Bangkok before catching a flight to the US. But I ended up staying in Chiang Mai a bit longer because I was in a funk.

One bored night, I was swiping left left left on Tinder until this gorgeous, melanated, well-traveled guy popped up on my screen. You know my butt was eager as hell to swipe right, and what do you know? It was a match 🥲

Sam* and I continued to text until we fell asleep. We talked about where we traveled to, where we were going next, gave each other recommendations, etc. It was just what I needed at that moment.

Talking to him was like a breath of fresh air, and I hadn’t even met him yet.

Of course, we planned to meet up the next day; it was only right. He was in town for a few days, and I was headed back to the states for Christmas. So I met him at his hostel and the moment I got there, I began feeling all the feels. Heart was beating fast. Palms sweating. Blood rushing to my face.

Ahhh, he was even more beautiful in person, and I couldn’t take it. I felt like the 5 year old me, and didn’t know what to do with myself.

We made some small talk, then took off on our motorbikes to head to the grand canyon. That gave me about 30 minutes to calm my nerves before we talked again.

When we got there, we found a place to sit—both shy, but eager to get to know each other. We talked for hours until both of our guards went down. We talked until we were the last ones in the park and until it was pitch black outside. Time passed by and we didn’t even make it into the water like we were supposed to.

Eventually we had to leave the park, but we were still enraptured by each other’s presence, we so we agreed to go to the Sunday night market.

Strolling down those streets with him felt like it was destiny. I mean, technically, I was supposed to be in Bangkok that night.

He grabbed my hand as we walked and instantly my stomach dropped as if I were on a rollercoaster. This man’s touch was electric.

After we were done at the market, we still didn’t want the night to end. I remember him kissing me under the moonlight sky—I could have sworn I was in love!

It felt rare and special to meet someone like him and I didn’t want our time to end together. Apparently he didn’t too, because he said that he wanted to come back to Chiang Mai to see me.

I thought, maybe he’s just saying this to say this, so I tried not to get my hopes up. But we did spend the rest of the time together before I left. We went on more adventures and laughed until we couldn’t anymore. We trekked up into the mountains and bonded over our love of nature. 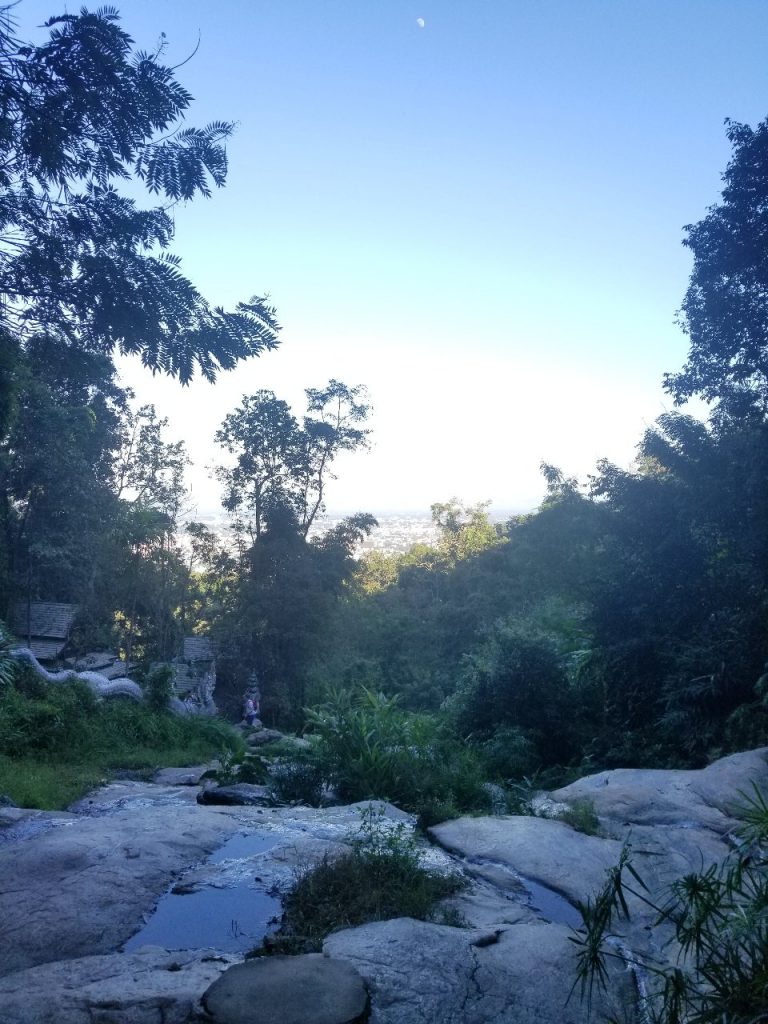 trekking up the mountains

Then the night I had to leave, he dropped me off at the bus station and I felt heaviness in my chest.

It didn’t make sense, I just met this man. But honestly, I could see why I felt strong feelings towards him.

Sam and I continued to keep in touch while I was home. He sent me pictures + videos of his travels and facetimed me.

Alexa play ‘You got it bad’

I indeed had it bad for Sam, and so desperately wanted him to come back like he said he would.

Fast forward into the new year and I’m back in Thailand. Sam let’s me know he got his ticket and will see me in about a week 😍

When he arrived I was just as nervous as the first time, if not more. Playing it cool was never my thing. I’m sure my emotions were showing all over my rosy cheeks.

He really came like he said he would, and that meant everything to me.

We spent the next week laughing and sending each other memes.

We drove into the mountains again and explored some temples. I trusted him enough to let him drive up the winding road on my motorbike, but oh was it worth it. To literally and figuratively be way up high.

Our days consisted of more adventures, like him convincing me to jump 30 feet off a cliff into the water. Then us floating in the lake while our skin soaked up the sun rays. As we floated, we talked about any & everything.

After our long days, we found shows to watch together, and he cooked for me. We even had a mini fight. 😂

I loved spending every moment with him.

Not only that, but I found someone who loved travel + adventures just as much as me. We just meshed so well together.

This time when he left, the heaviness in my chest wasn’t as bad because I was grateful for the time we shared. We both got to be a chapter in each other’s books.

Even though this only lasted about a month, falling in like abroad was the most extraordinary feeling ever. And he will always have a special place in my heart.

A Lisbon transplant, entrepreneur, educator, and wellness blogger who enjoys sharing my international adventures + helping others to relocate abroad.

We had a blast in Cape Town celebrating my girl @g

Excited for what we have in store for 2023! @black

My ranking based on this list. If I had to do my o

3 Days spent in Rome. The food is definitely wor

NGL, Madeira was underwhelming (despite the song l

Travel story: how I made a lifelong friend while i

This website uses cookies to improve your experience while you navigate through the website. Out of these, the cookies that are categorized as necessary are stored on your browser as they are essential for the working of basic functionalities of the website. We also use third-party cookies that help us analyze and understand how you use this website. These cookies will be stored in your browser only with your consent. You also have the option to opt-out of these cookies. But opting out of some of these cookies may affect your browsing experience.
Necessary Always Enabled
Necessary cookies are absolutely essential for the website to function properly. This category only includes cookies that ensures basic functionalities and security features of the website. These cookies do not store any personal information.
Non-necessary
Any cookies that may not be particularly necessary for the website to function and is used specifically to collect user personal data via analytics, ads, other embedded contents are termed as non-necessary cookies. It is mandatory to procure user consent prior to running these cookies on your website.
SAVE & ACCEPT
44 shares
44 shares