I’m sure you’re wondering if spending 3 days in Barcelona is enough time? Well, it’s the perfect number of days for those who want a quick trip and/or if you’re a budget traveler.

In just 3 days, you can walk around Barcelona, visit museums, drink endless sangria, go to the beach, eat tapas, and more! That alone was enough to make me want to take a quick trip there.

Barcelona is in the Catalonia region of Spain, meaning it has its own culture and language. So, I would recommend visiting for sure, even if the trip is short.

But before you go, here are some things about Barcelona you’d want to know before visiting.

You can use this itinerary as is, or craft your own based on where you’ll be staying, what interests you, and what’s walkable vs what’s not.

The Gràcia area is great. You have a metro station in the vicinity and can walk to most places. As a solo female traveler, I felt safe walking around by myself, even the few times I had to walk at night.

Be Mate are apartments for rent in the heart of the city costing about 100 euros/night.

If you’re looking for a budget-friendly option, Rodamon Barcelona Centre is that place and is near the tourist hotspots. The rooms start at about 22 euro/nights.

You’re probably going to want to hit the ground running. I mean, you are in Barcelona.

Since you’re going to be adjusting to a new city, it’s best to take it easy, but still get your adventure time in.

Today’s the perfect day to visit the works of Antoni Gaudi—a world renowned Catalan architect. That includes La Sagrada Familia, Casa Milà, Casa Batlló, Park Güell, but there probably won’t be enough time to visit all four. Unless you don’t go inside.

La Sagrada Familia is a UNESCO World Heritage Site and Roman cathedral. Many tourists do a quick walk by for a photo op or just to observe exterior beauty. Others think it’s worth it to pay to see the inside and learn about the history.

Either option is fine, and just depends on what interests you.

If you want to see the inside—check the website for times and to buy your tickets in advance.

Casa Milà is an eccentric style building which sparked controversy in the Modern architecture movement. It’s also Gaudi’s last building designed before he passed away.

The inside includes a collection of art from over the course of Antoni Gaudi. You can also catch exhibitions, shows, and other activities at Casa Mila. Depending on what you’d like to see and do, your ticket cost will range from 24 to 43 euros.

Casa Batlló is one of Gaudi’s masterpieces.

Reminds me of an enchanted home you’d catch in a Disney movie; the building is so enticing, you can spot it from a mile away. It certainly magnetizes you and makes you stop for a moment to see what that is.

And just like Casa Milà, there are different tours you can do—the magic night or 10D experience.

Park Güell is something you might have seen in the pictures.

Out of every place, I suggest coming here for sure. It’s well worth the money and you can purchase your tickets in advance.

You’ll have to trek uphill to get to Park Güell, but well worth it when you get a view of the entire city. The park is enormous, so expect to spend about an hour walking around and being mesmerized by the architecture. 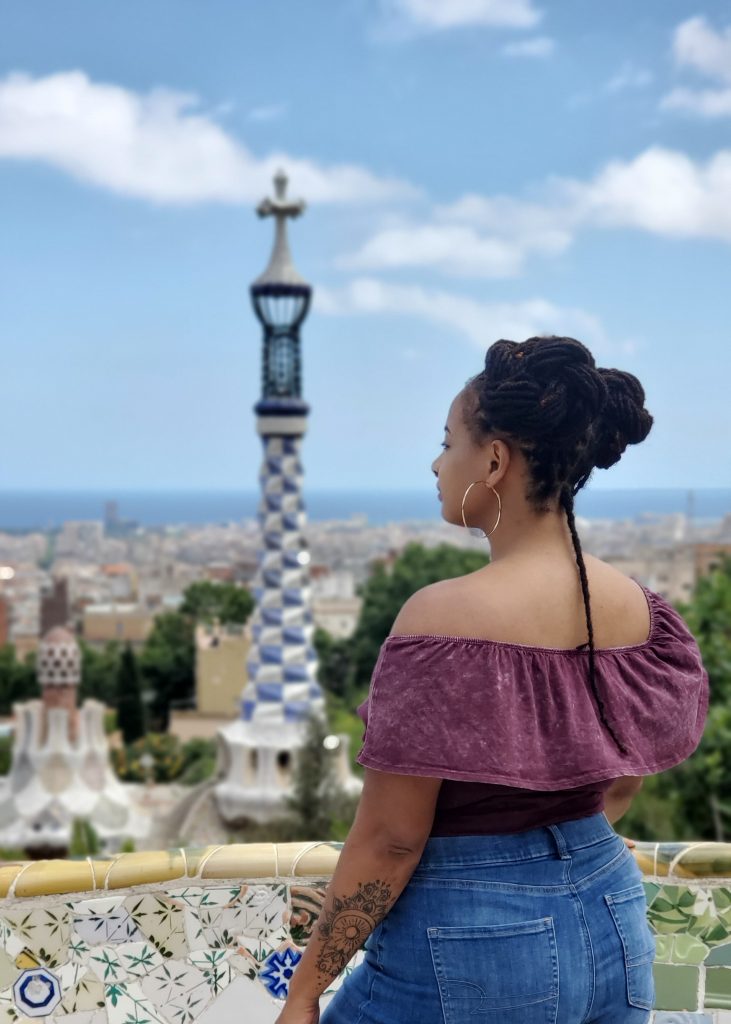 You can sign up to do a free walking tour if you want to join a group. You can also easily do one yourself and go at a pace that works for you!

Wear comfortable shoes because you’ll be walking around a lot.

You’re going to start at the Columbus Monument, which is a well-known landmark. A statue dedicated to the colonizer, Christopher Columbus.

From there, you’ll head to the street La Rambla, a walkway full of tourist stalls and what is considered to be the city-center.

During your stroll, you’ll want to stop at Plaça de Catalunya—a square in the heart of Barcelona. But if you’re anything like me and have a phobia of birds, be mindful lol. They are EVERYWHERE. 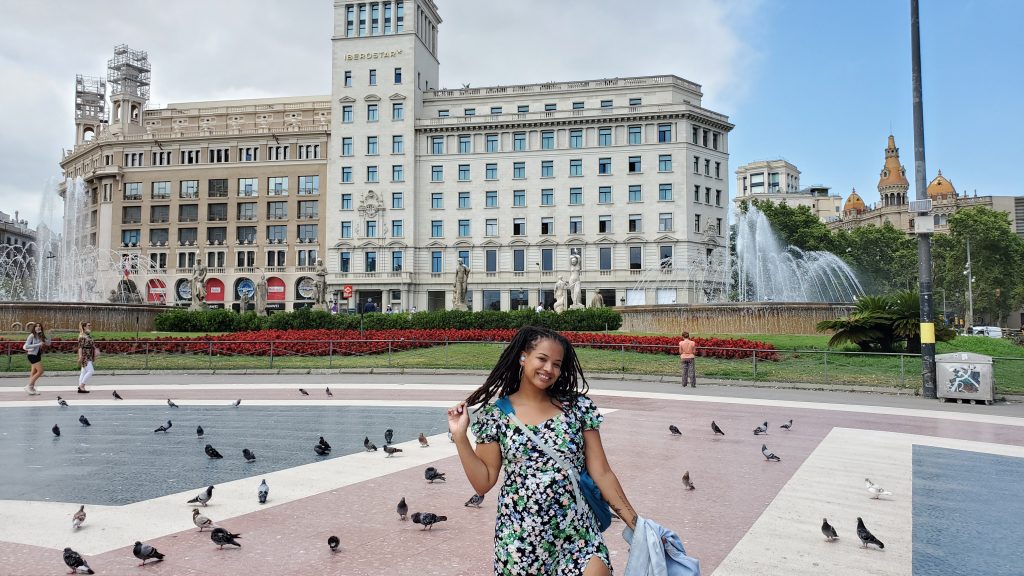 On your way to next destination, you’ll pass by Arco de Triunfo de Barcelona. Have your camera ready for some bomb flicks!

After being in the center, it’ll be nice to be somewhere more serene—visiting Ciutadella park will give you that. Filled with greenery, people lounging around, and chill vibes.

Then you’ll head to The Parliament, which is in the Ciutadella park and the last stop of the walking tour.

It’ll take 44 minutes to walk without stopping, but you’ll want to stop for food, shop, rest, to take pictures, etc.

After all the walking and exploring you’ve done in Barcelona, you deserve to chill on the last day.

The Telefèric de Montjuïc is a cable car ride that gives you the best views of Barcelona and a chance to unwind. Riding up to the top will have you at a loss for words. All you can do is sit still and embrace everything.

The round trip up and back is about 13.5 euros and you can purchase your tickets online. Once at the top, you can walk around for more views and there’s even a museum you can go into for an additional fee. I skipped it though.

And last but not least, end the trip at the beach, Barceloneta. Go in the afternoon, or for a sundown cool off. It even has a boardwalk you can stroll down before you hit the beach.

Spain is known for tapas aka small plates and you’ll see them just about everywhere. You definitely have to try:

As a vegetarian, I can’t recommend any meat dishes, but you can find some wonderful suggestions here. 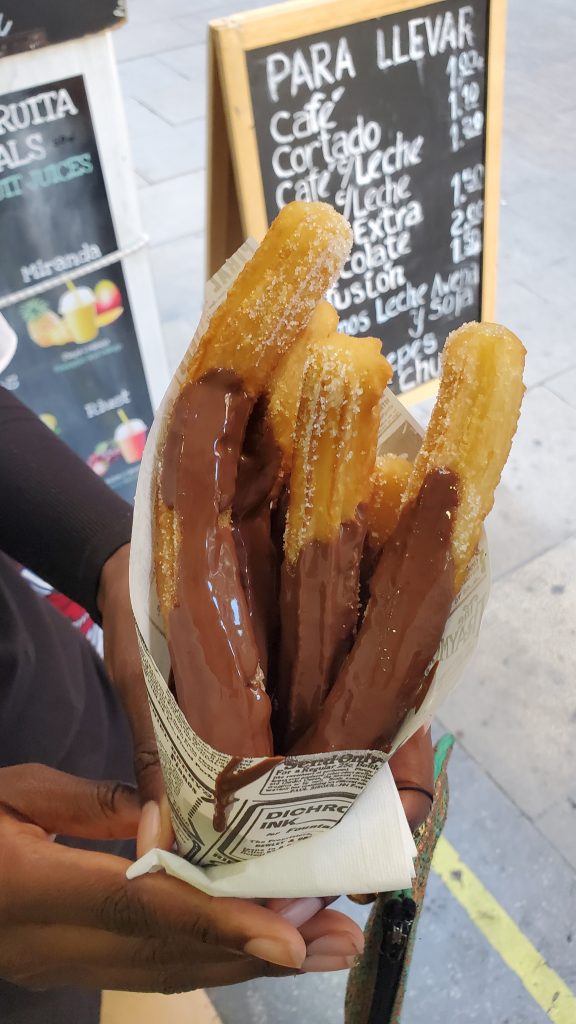 3 days is enough time to hit up spots and enjoy Barcelona, but I’m certain you’ll want to visit again!

Happy Valentine's day everybody!!! This is how you

#fbf to that one time I fell in "love" abroad. ho

Finding community aboard is important, especially

These 7 travelers have all inspired me, and will d

Look at all this beautiful melanin in Lisbon 😍

This website uses cookies to improve your experience while you navigate through the website. Out of these, the cookies that are categorized as necessary are stored on your browser as they are essential for the working of basic functionalities of the website. We also use third-party cookies that help us analyze and understand how you use this website. These cookies will be stored in your browser only with your consent. You also have the option to opt-out of these cookies. But opting out of some of these cookies may affect your browsing experience.
Necessary Always Enabled
Necessary cookies are absolutely essential for the website to function properly. This category only includes cookies that ensures basic functionalities and security features of the website. These cookies do not store any personal information.
Non-necessary
Any cookies that may not be particularly necessary for the website to function and is used specifically to collect user personal data via analytics, ads, other embedded contents are termed as non-necessary cookies. It is mandatory to procure user consent prior to running these cookies on your website.
SAVE & ACCEPT
12 shares
12 shares